Skip to content
We just rehung the Gallery to show off all eight of our painters. It’s a true delight to walk in and see such a lavish display of this tremendous group of artists.
I hope you’ll come by and experience it! 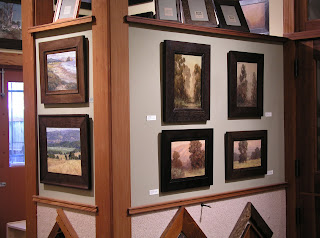 I recently took a trip with my friend Richard, also a painter, up to Mendocino and Fort Bragg. We traveled in Artie, our newly acquired RV. Our weather was amazing for January, sunny and warm during the day, cool at night with some fog. The coast line was glorious with one picturesque cove after another. We stopped and painted where we could find a place to pull over and enjoyed having Artie to take a lunch break in or just get warm in at the end of the day. In Fort Bragg we met up with a painting friend, Eleanor, and joined her plein air group to paint at Navarro State Beach on Thursday 1/29. We ended up parking the RV there for two nights, it was so beautiful. The beach was full of driftwood and there were great cliffs to paint in the afternoon light. This photo was taken of me painting at Navarro Beach on Jan. 29th. I love using my portable Easy L easel, small and compact.

Our next adventure in February will take us to the South West. I will take photos and send in some updates on where we are as well as painting spots that we like.